So I found two things that had to be shared here. Enjoy!

First, a Cas vs 10 picspam
lucythedragon.livejournal.com/478062.html

Has anyone watched it yet? To me, this one really delivered. I'd been majorly disappointed by the last two and was expecting to be even less excited this time around since it's been so many months and since I've pretty much gotten over my David Tennant infatuation, but this episode dealt with some heavy themes (that didn't really play out until the last 10-20 minutes, but were worth the wait). It was kind of like emotional blue balls, though, only bringing me to the edge of tears and getting my stomach all tangled in knots but never pushing me over the brink. I'm sure that was intentional--Russel T. Davies is just winding us up for the next one, before the regeneration. David Tennant really had some brilliant moments in this, I hope the new boy can stand up against such a fine actor. 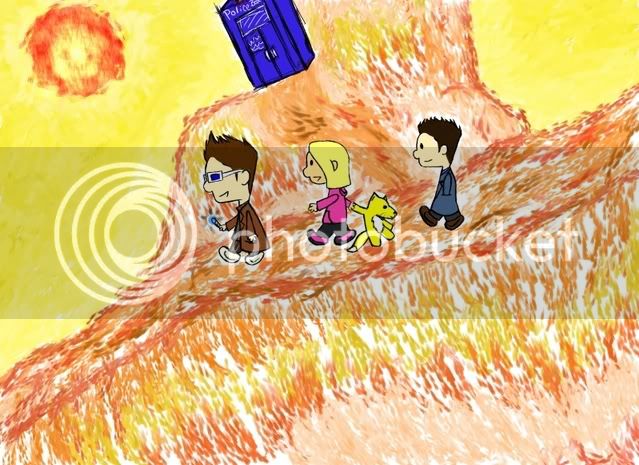 I can't believe there's a Humboldt Doctor Who community! This is incredible!
I actually don't live in Humboldt yet but I'm trying to move here for the fall semester at HSU (transferring from San Francisco). Hope that's alright!

So, I don't have anybody to talk to Doctor Who about except for my 11 year-old sister and 6-8 year-old male cousins, who I introduced the show to last Christmas (they loved it!) and a couple friends who aren't nearly as enthusiastic about it as me. It sucks!

Did anyone make it to comic-con this year to see David Tennant? (I didn't, but I really wanted to).

YEAH! Finally found a reason to bring Repo to this comm.

Okay, so I totally had the thought of getting a pair of mannequin legs so I can display my thigh-high boots (seeing as how I have no reason to wear them anymore), and they won't be hanging in my "closet."  Anyway, I was thinking about how cool it would be, then I remembered the episode "Rose" (the 1st episode of the new series).  This is the one where the mannequins come to life and attack people.  Now I can't stop thinking of my boots chasing me, kicking me down, and stomping me to death.


...Thanks ever so much Doctor Who

Okay, so this is possible the best short fic EVER. It's a Supernatural/Torchwood crossover, one chapter, and I laughed so hard I choked. Here, go read it.
http://www.tthfanfic.org/Story-11148/echo+Lightening+Crashes.htm

I have a serious burning desire to read Lost Boys/Doctor Who fic...okay I mostly just want to read Lost Boys fic, but if a crossover like that existed I want to read it.  Seeing as how this is a big request, how about a crossover with and vampire story?  I've read a lot of BTVS/ATS/DW fics, so don't worry about grabbing those.  Eventually I'm going to make a post of those.
Collapse